As I am sure most of you are aware, the IHSA has cancelled all spring sport activities.  We have decided to follow the lead of the IHSA and Saint Viator High School and cancel spring hockey.

We had hopes to return to the ice on May 1st, but that unfortunately it is not going to happen.  We are waiting on the instruction of the IHSA and the governor as to when we can start back up again and adhere to any new restrictions that might be put in place.  As soon as we get some guidelines as to when we can safely get back on the ice we will start to develop our summer program.

Since the situation is constantly changing,  we do not yet have ice times and dates locked in for our summer program.  The safety of or players, coaches, parents and families has been, and will always be our top priority.  We will adhere to any guidelines that are recommended by the powers that be in order to keep our Lion hockey community safe and healthy.

As mentioned in a prior email, we will issue all springs fees that have been paid as a credit toward fall fees.  If you are requesting a refund at this time please let me know and we will be happy to issue it.

In the meantime, I will be contacting all new players to our club as we can start the Jersey number and Jersey sizing process for the Fall / Winter season.  We can hopefully get a head start on this process so when the fall season comes we will be fully equipped and ready to go.  Any returning players that are in need of a new jersey please contact me so we can get the process of ordering a new jersey rolling for you as well. 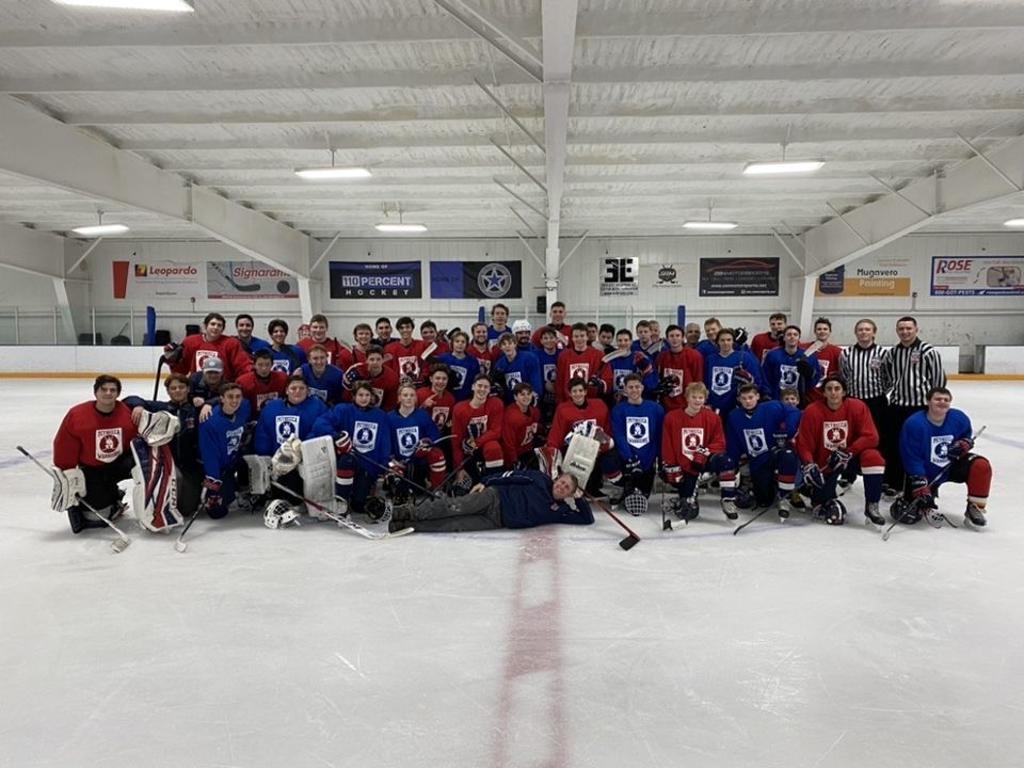 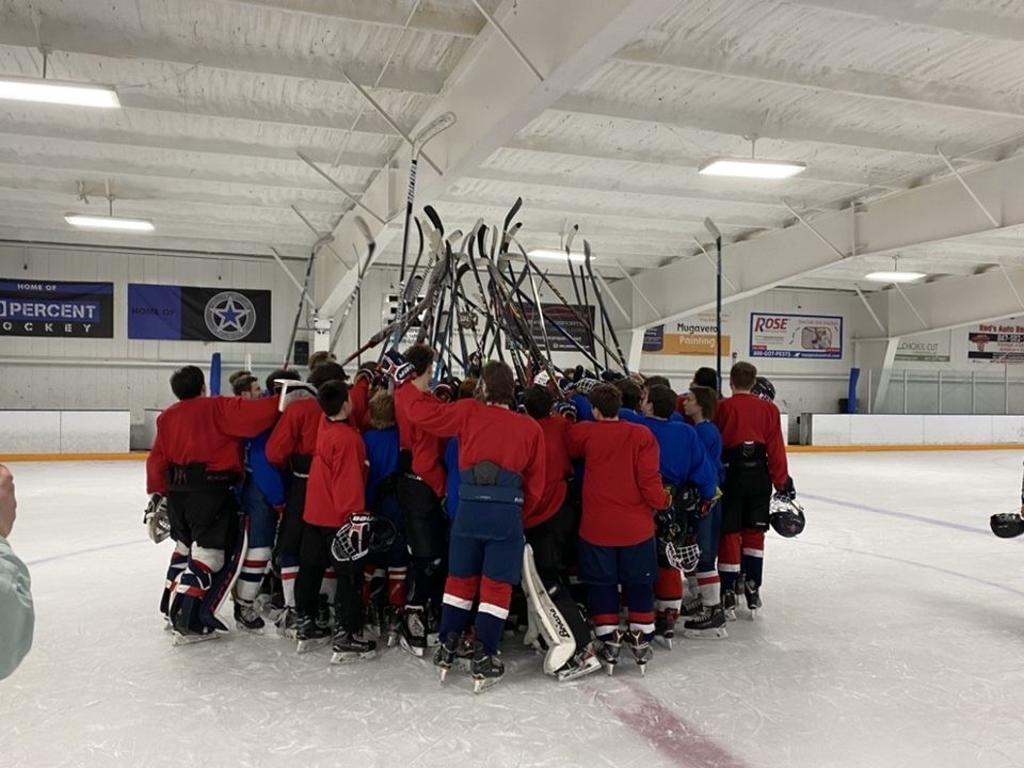 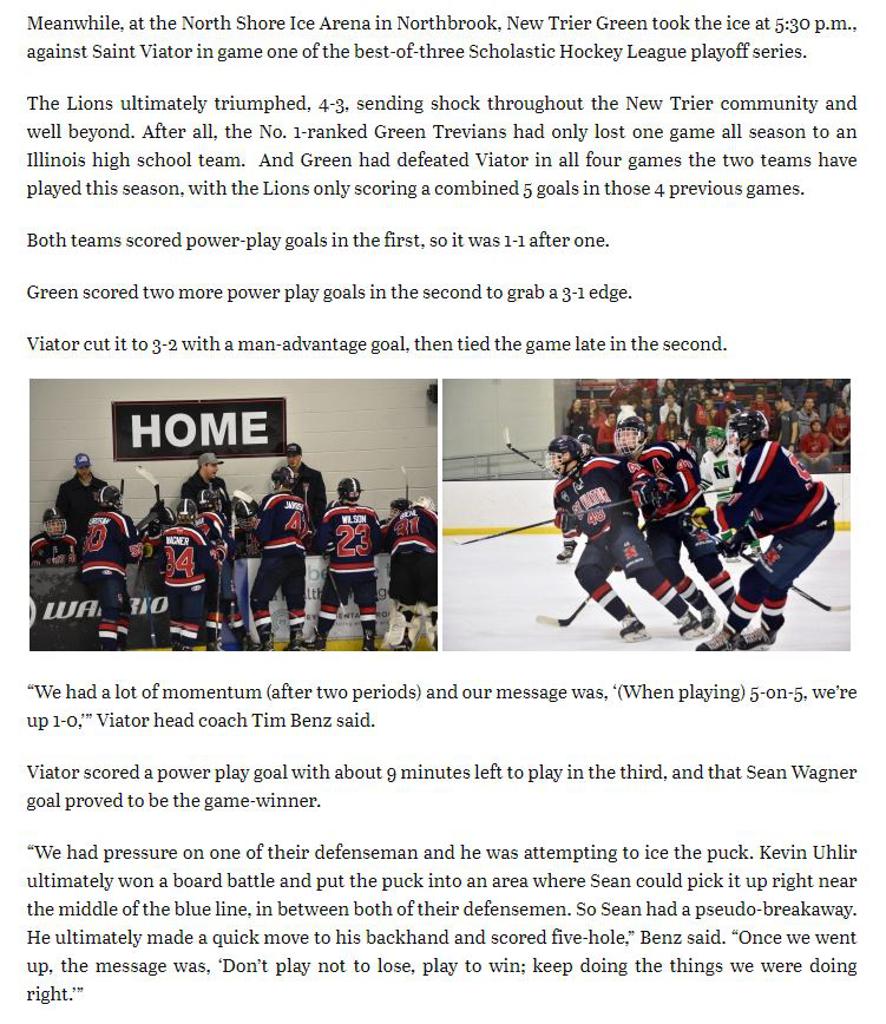 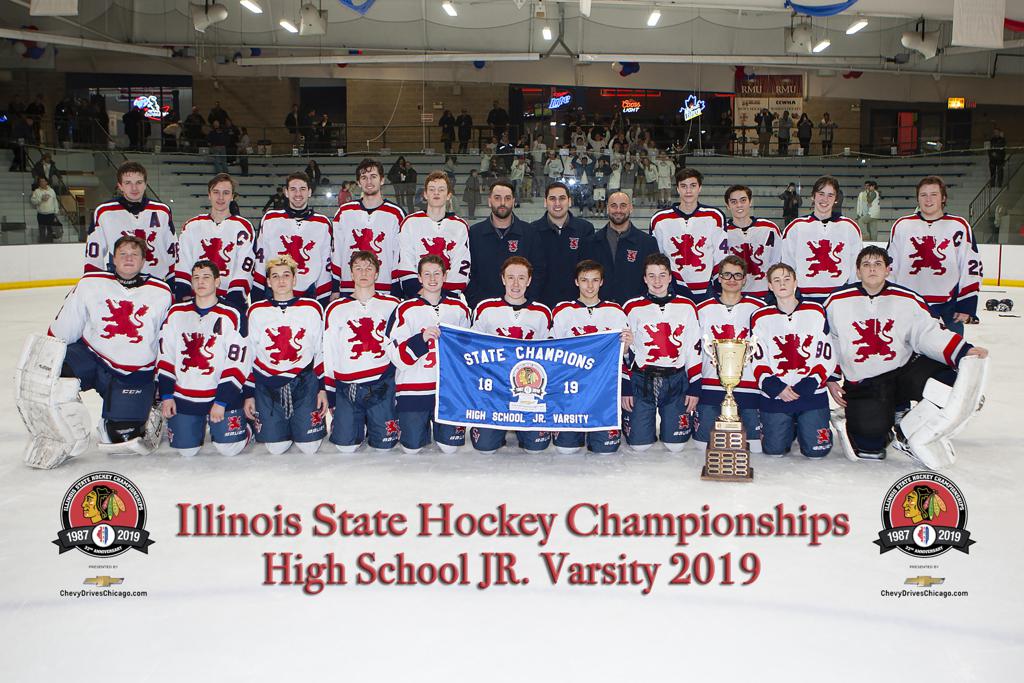 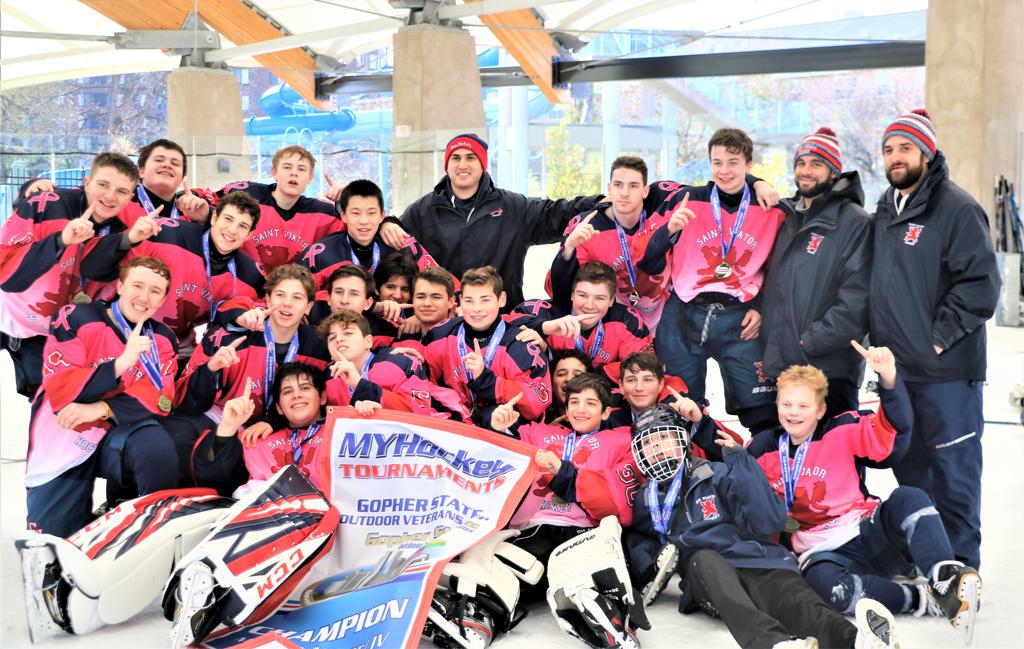 The Saint Viator Hockey program has had a long tradition as one of the premier High School Hockey programs in the State of Illinois for over 40 years.  The team plays in the Scholastic Hockey League, which is perhaps the most competitive High School Hockey league in the State, producing several State Championship teams and finalists over the years.

Several of our players have also gone on to play in the junior leagues as well as at prep schools and the collegiate level (both varsity and club).  Among the many goals of the program, we strive to develop all of our players on ice skills as well as teach them valuable off ice lessons and principles in an effort to assist in their development as young men and women.  As a Saint Viator Hockey player,  you will have the opportunity to be a part of the rich Saint Viator Hockey tradition and to represent Saint Viator and its values together with your fellow classmates. 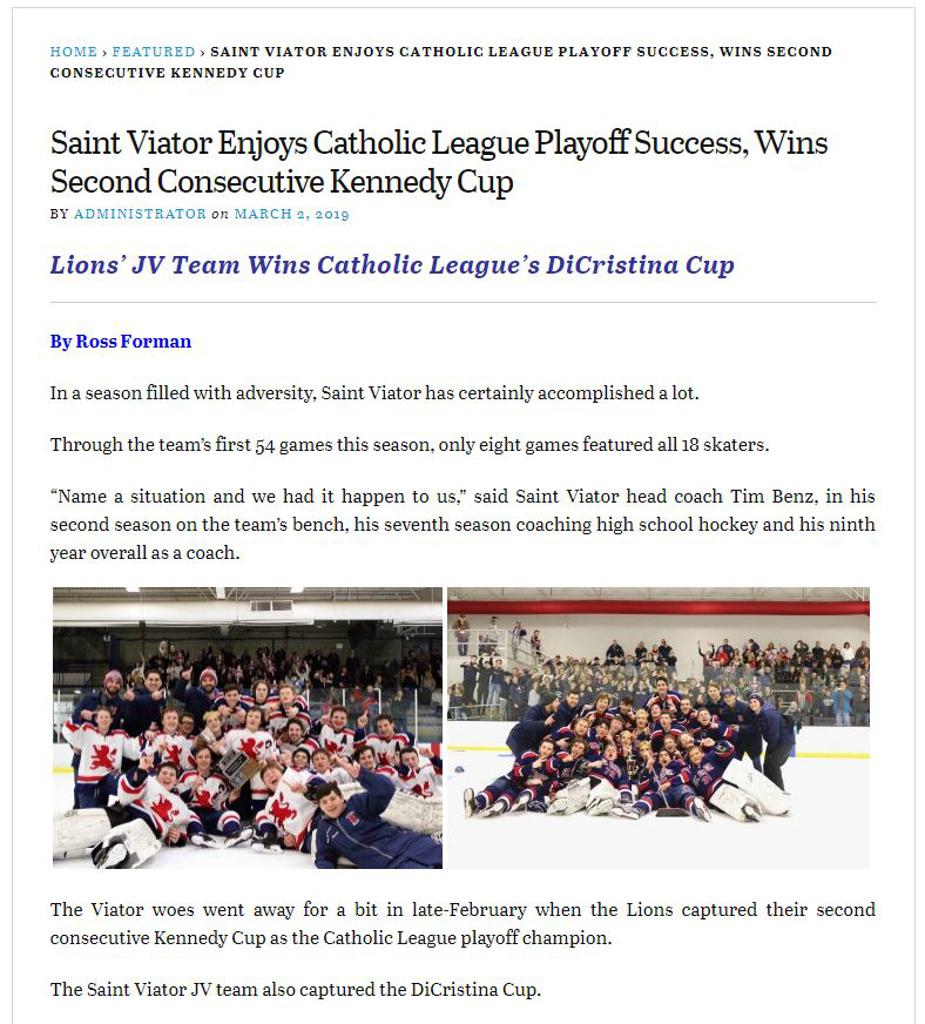 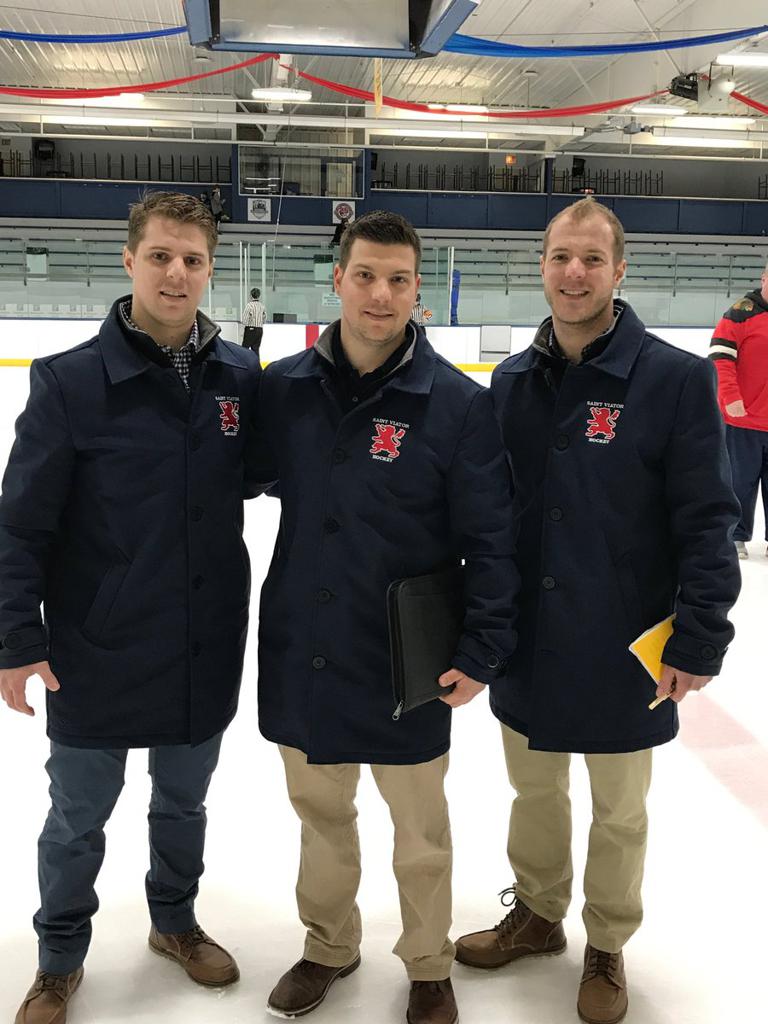 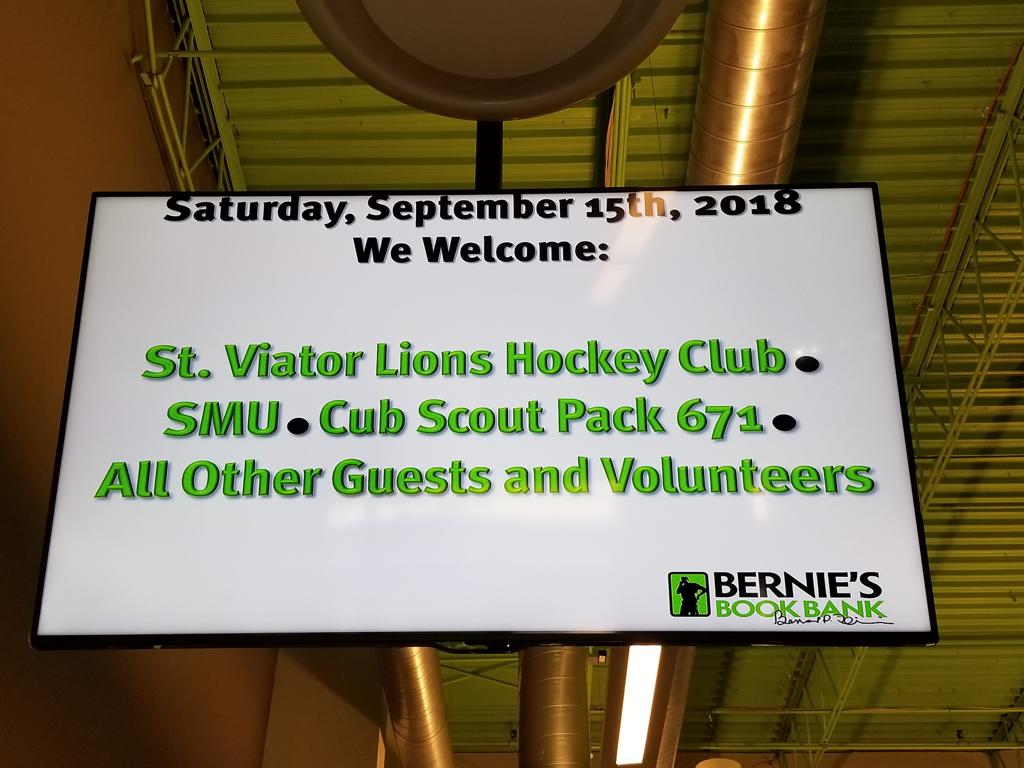 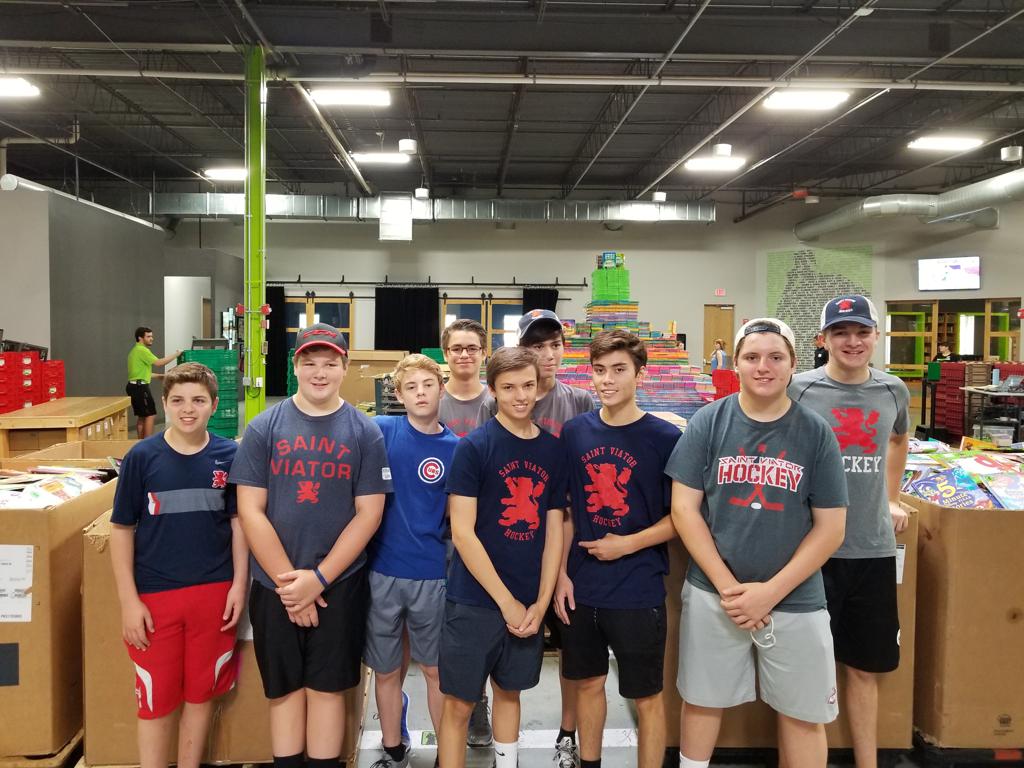 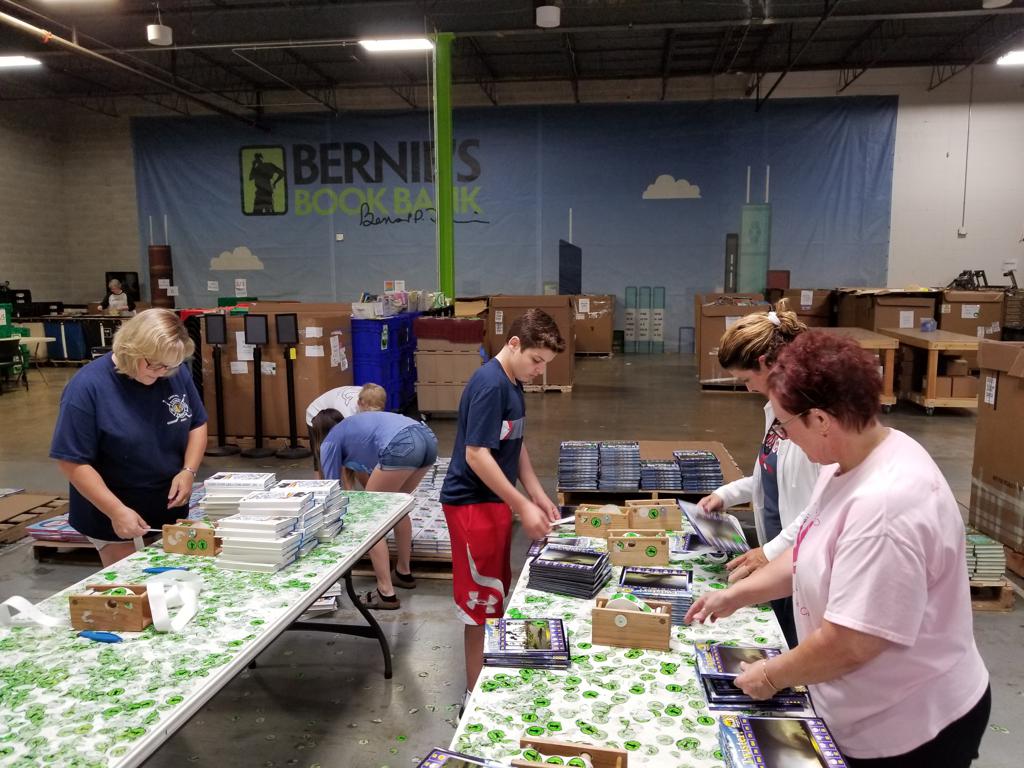 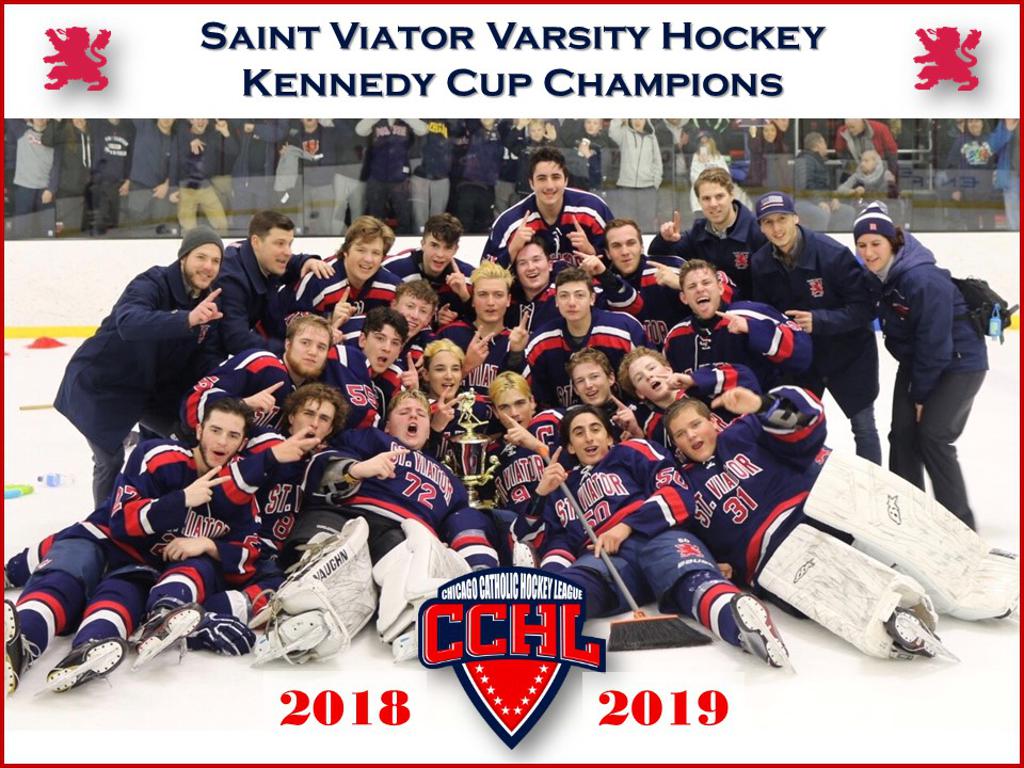 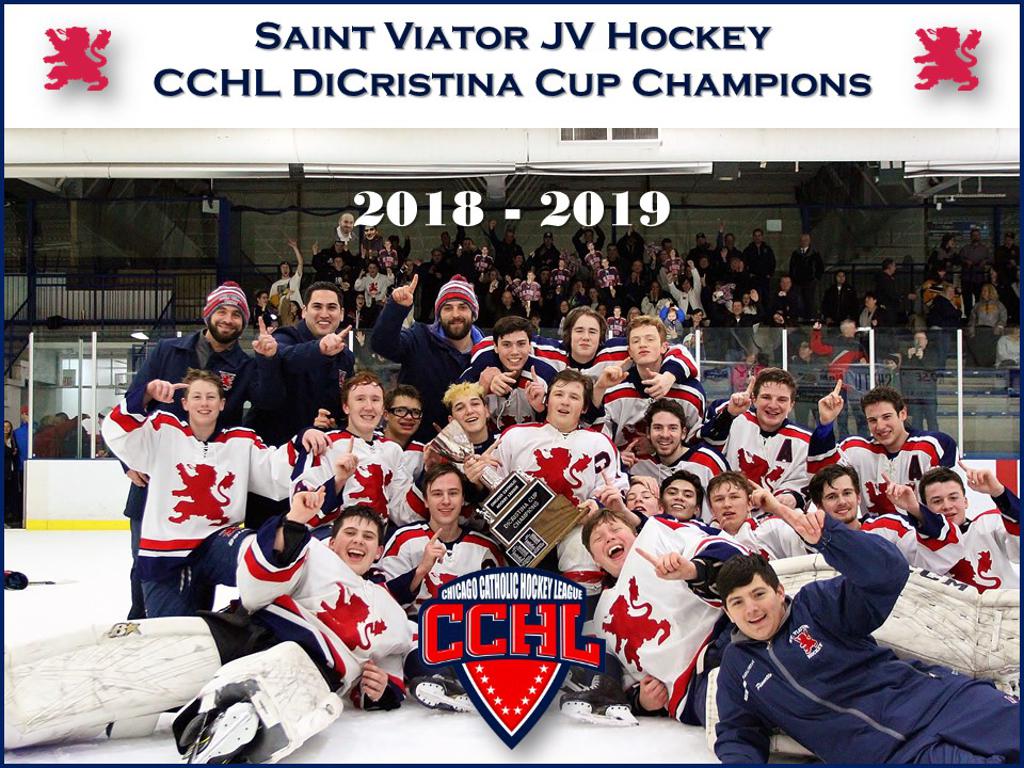 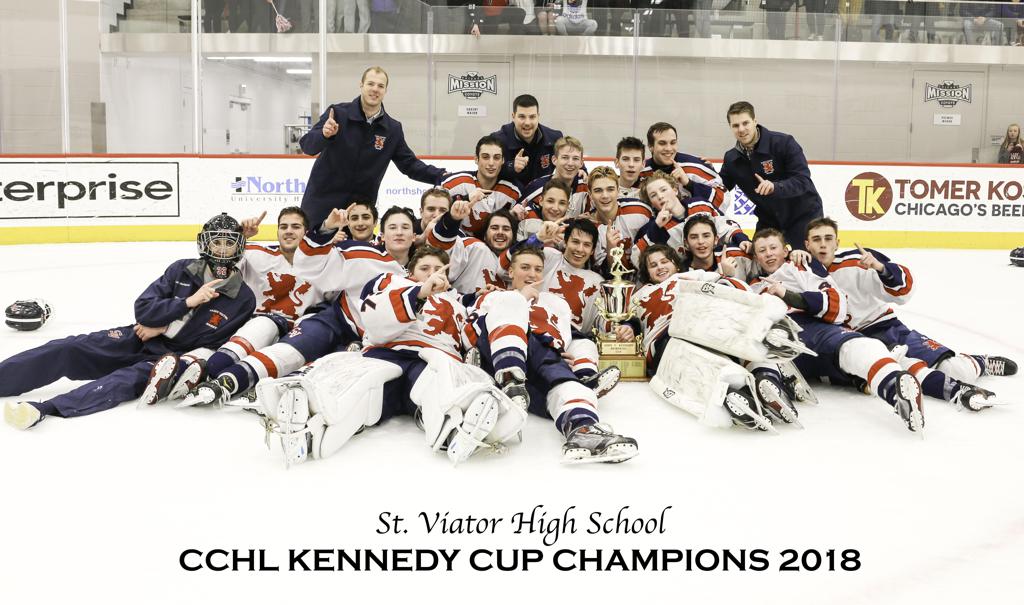 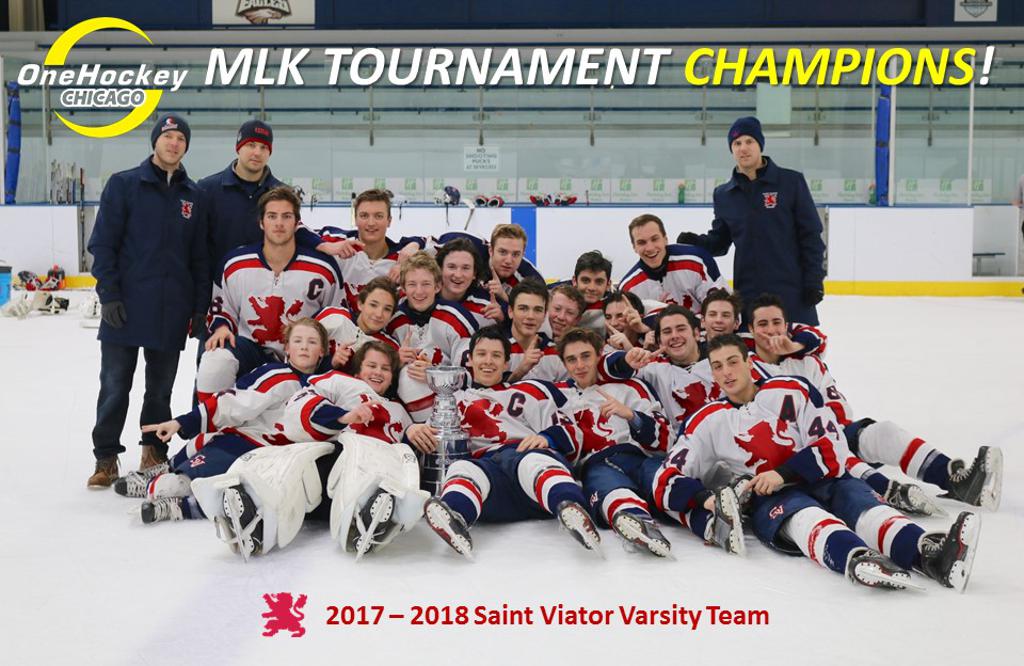 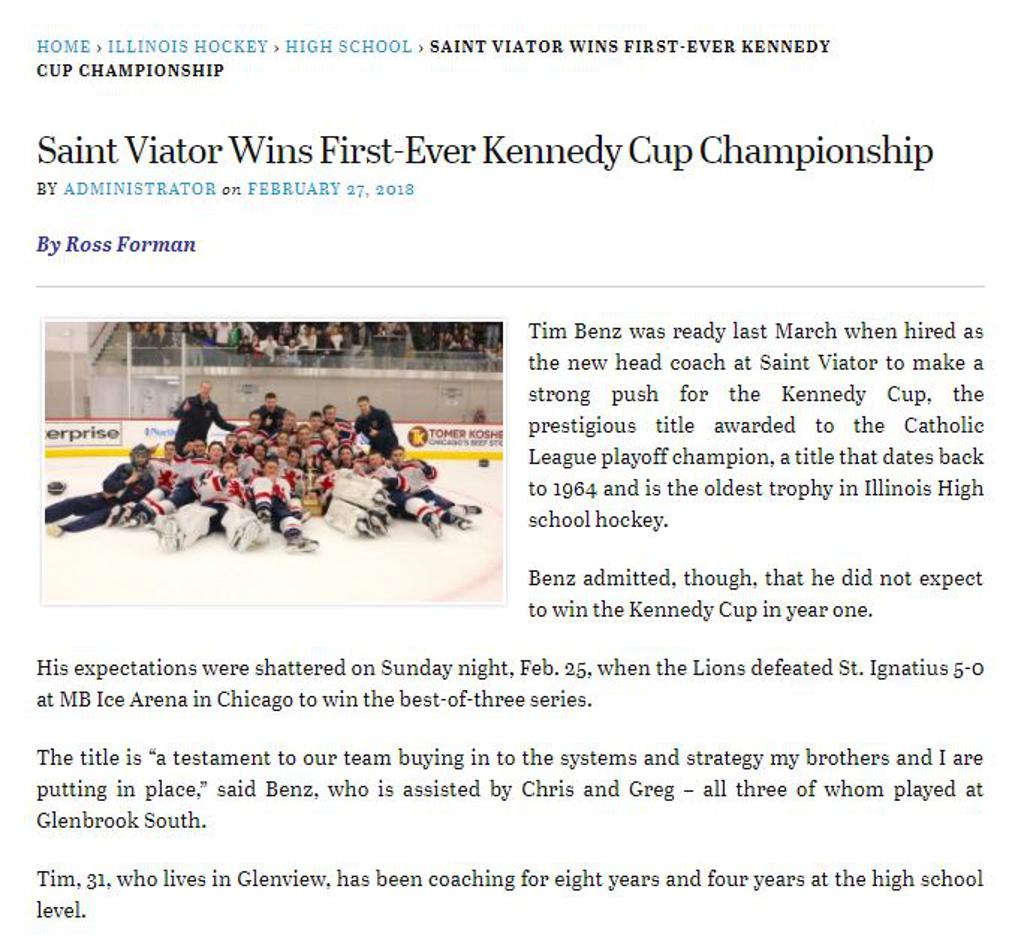 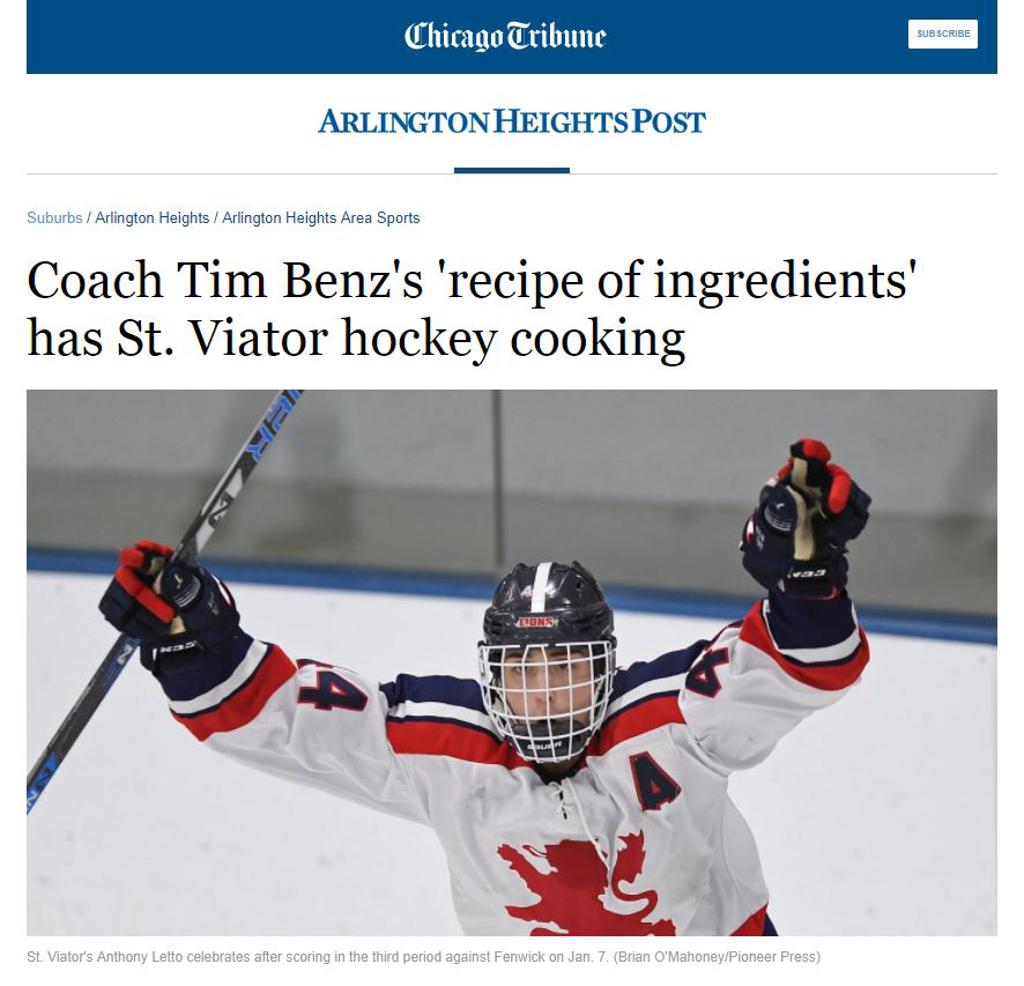 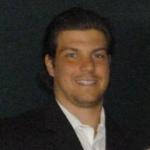 I am pleased to announce that Tim Benz has been named the Hockey Director and Head Varsity Coach for Saint Viator High School’s Hockey Program.

Tim played youth hockey for the Glenview Stars and Glenbrook South.  After graduating in 2005, Tim played collegiately for DePaul University and professionally for teams in the AAHA and FHL.

Tim began his coaching career in 2010 with the Glenview Stars and is currently the Head PW AA coach as well as the Director of Player Development and Skills for the Stars.  Tim joined the Loyola Gold coaching staff in 2014 where he is currently the Co-Head Coach. Tim is President and coach for Ultimate Athlete, athletic training and skills development, and a Delaney hockey skills instructor.

Tim currently works for CDW as an International Sales Analyst.

Joining Tim on his staff will be his brothers, Chris and Greg, along with Sal Calace.

Chris Benz grew up in Glenview, playing hockey for the Glenview Stars, Chicago Mission and Glenbrook South.   Post high school, Chris played for Indiana University and where he was selected to play in the World University Games.  After college, Chris played professionally for teams in the ECHL and FHL.

Chris started his coaching career in 2012 with the Glenview Stars and is currently an assistant coach on Loyola Gold.  Chris is also a skills coach with Delaney Hockey and Ultimate Athlete and is currently an employee at Zotos International where he is a Sales Manager/Analyst.

Greg Benz, like his brothers, grew up playing hockey for the Glenview Stars and Glenbrook South High School.   Greg went on to play at Indiana University with their ACHA Division I team and professionally in the FHL.

Sal played against all three Benz brothers (Glenbrook South) throughout his high school career. Post High School career, Sal played for Indiana University in the ACHA (’06-’10) where he was selected as one of 3 goalies to the inaugural GMHL All-Star Game (’08 - ’09) and was runner up in the DII National Championship (’07-’08).  Sal continues playing hockey in goal for two different Adult Hockey teams. Sal, 30, works as a solutions consultant at Oracle Corporation.

Tim Benz and his staff’s term with the Saint Viator Hockey Club will begin with the 2017 Spring and Summer programs.  Tim, his brothers, and Sal are relinquishing all other team coaching positions to focus their attention exclusively on our program.

Thank you for your continued support of our Hockey Club,

ROY PERFETTI Returns For Another Great Year As The Goalie Coach For The Saint Viator Hockey Club!

The Saint Viator Hockey Club Would Like To Thank THE JOSH STRUTZ FOUNDATION For Their Continued Support!